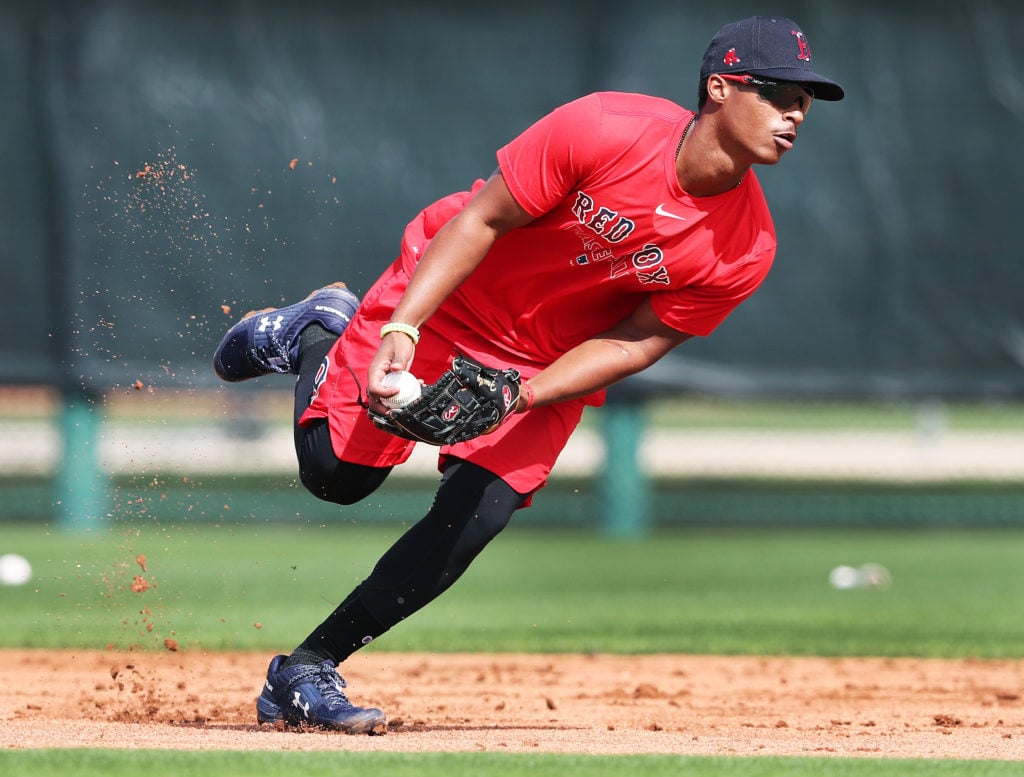 I've hated pretty much everything about this year's Red Sox spring training. Without any hope, it's been tough to even really monitor and watch. With that said, there is one thing that gives me a glimmer of positivity and that is the thought of exciting young talent being on display. Boston is still trying to build its farm system back up, but there certainly are a few notable names seeing action this spring and giving us a peek at what the future could hold.
So let's talk about these young guys that will be roaming the diamond in places like Lowell, Portland and Pawtucket this summer. Maybe we'll even get some of them up to Fenway if they accelerate their production or if more likely, the Red Sox tank and decide to give the youth movement a try come August. Without further ado, this is the list of prospects that you need to start tracking, if you haven't already.

Triston Casas (First Baseman) - By most accounts, Casas is the best prospect in the Sox minor league system. The 20-year-old was drafted out of high school by Boston in 2018. He was a first round pick and was originally meant to be a third baseman but quickly moved over to first. That's certainly been a position of need for Boston over the years as they've missed having a steady hand to man that part of the diamond day in and day out. Hopefully Casas can turn out to be that stud.

Standing at 6-foot-4, Casas looks the part of a power-hitting corner infielder. He needs to develop a bit more beyond just having raw power at the plate because his upside relies on his offense. We've really only seen one minor league season out of him because 2018 was taken away due to a thumb injury in his second game. The good thing is, 2019 was productive.

Casas spent 118 games with the Class A Greenville Drive before being promoted to the Class A-Advanced Salem Red Sox, where he played in 2 games. With Greenville, Casas batted .254 with 19 home runs, 78 RBI and an .820 OPS. The season got him ranked on most Top 100 prospect lists and drawing comparisons to Braves All Star first baseman Freddie Freeman. If he's even half of Freeman, the Sox will have struck gold.

Bobby Dalbec (Third Baseman) - While Dalbec isn't regarded as the Sox #1 guy like Casas and isn't listed on too many top prospect lists around the MLB, he's gaining steam locally. We've seen Dalbec rake in Spring Training, in the minor leagues and for Team USA. He was drafted by Boston in the fourth round out of Arizona back in 2016, so he's certainly spent some time down on the farm before he really popped. At 24 years old, he's ready to go.

The #RedSox No. 2 prospect smashed this one to break the game open for Team USA, who now hold a 7-0 lead in the first game of the #Premier12 tournament. #ForGlory pic.twitter.com/eHZPMLtnnM

Last season, Dalbec spent 105 games in Double-A Portland and 30 games in Triple-A Pawtucket. He combined for 27 homers and 73 RBI while slugging .802. His power is tremendous and is what has gotten him notoriety among Sox fans. The thing he needs to work on, much like Casas, is his hit tool. He only batted .245 and needs to improve on that to challenge for a spot in Boston. Unlike Casas, he's an above average defender at third base, so he's got something else to lean on. Dalbec has the highest probability of spending a chunk of time at Fenway this year, so we'll likely find out if he can really hack it in the bigs sooner rather than later.

Jeter Downs (Second Baseman) - Obviously, Jeter Downs is the guy the Sox got for Mookie Betts. At least, he's the big name prospect. The 21-year-old second baseman is slight at 5 foot 11 and 180 lbs, but he actually has decent pop in his bat. Couple that with his above average hit tool, and strong defense at second base and Downs could end up as a big league star.

With second base being a bit of a question mark for the Red Sox right now, Downs presents an answer down the road. Dustin Pedroia is likely done and Michael Chavis needs to prove he belongs. The argument can be made that Downs is the answer and we the Sox sure need to hope so, considering he'll always be linked to Mookie.

I know I've killed the Betts trade but that really has nothing to do with the type of player Downs is. The former 2017 first round pick of the Cincinnati Reds was traded to the Dodgers organization in a package for Yasiel Puig after two seasons in Billings and Daytona. In 2019, Downs spent 107 games in Class A-Advanced Rancho Cucamonga before heading up to Double-A Tulsa for 12 games. He's performed at a high level despite being bounced around and hopefully will settle in with Boston's system (where his older brother Jerry is a first baseman for the Portland Seadogs) before climbing the ranks to The Show.

Jay Groome (Pitcher) - Jay Groome is the forgotten man. After being drafted in the first round by Boston in 2016, he was the prized possession. Everyone was talking about he was the top talent in that draft class and comparing him to the likes of Clayton Kershaw. The issue was, the Sox had the ability to draft him because he fell due to character concerns. He's had controversy follow him since high school and then injuries hit.

After appearing in three games between the Gulf Coast League Red Sox and the Lowell Spinners in 2016, he was ready to go out and start delivering on that promise in the following season. Unfortunately, he suffered an intercostal strain during his first start and missed two months. Groome came back to pitch in thirteen more games that season before being shut down with forearm tightness in August. The results weren't what anyone wanted as he went 3-9 with a 5.69 ERA for the season. Things only got worse in 2018 as he was pulled from his first spring training start and underwent Tommy John surgery, causing him to miss 2018 and most of 2019.

When he returned in 2019, Groome pitched in the Gulf Coast League and Lowell again. He saw action in three games and went four innings total, giving up five hits and one earned run while striking out three. Despite not having a huge sample size to go off of, the lefty's production has not been there at all. I'd go as far as to say that the injuries and ineffectiveness have thrown him off the radar of many. Hopefully, that's a good thing.

Groome's talent is HUGE. He's got a snapping curveball that projects as his best pitch, but can continue to develop his fastball, changeup and maybe even a cutter. He enters the season looking to regain the hype and show everyone what he can be when healthy. Here's hoping he can stay on the field to get a shot at doing so.

Jarren Duran (Outfield) - Duran has been the hot name in camp this year for sure. He's performed at a high level and shown that the Sox can probably move on from a Jackie Bradley Jr. while not missing much, if anything, by inserting Duran. We haven't seen the 23-year-old drafted in the 7th round in 2018 after spending time in the Cape Cod League and at Long Beach State. We've barely seen him spend time in Lowell, Greenville, Salem and Portland. We've hardly noticed him in the All Star weekend Futures Game. Somehow, despite obvious talent and upside, Duran hasn't gotten a lot of shine or publicity until now.

That's because he is a "late-bloomer" and seems to stay rather low key while avoiding too much attention. He's seen comparisons to Jacoby Ellsbury because of his plus hit, field and run tools, but also because of his below average arm and power. With all of that said, I think he's the most dynamic and electrifying of the players listed here. I could easily envision the Sox dealing JBJ sometime this summer and inserting Duran into the lineup every day to get his reps in.

So get excited about the players that could make their Fenway Park debut as early as this summer. We need a new infusion of young talent to get behind and if even one or two of these guys can materialize, it'll be a ton of fun to watch.

Previous article: 3 Scenic Massachusetts Day Hikes Where You Can Avoid The Coronavirus
Next article: The Celtics Need To Finish Strong