The Celtics Are Making Me Want To Tear My Hair Out 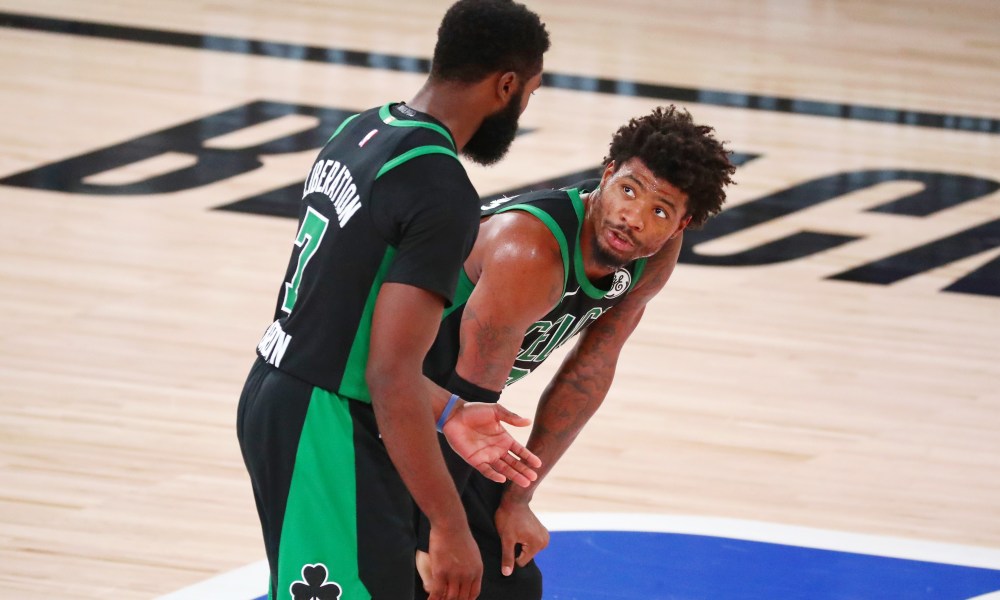 I'm going to venture a guess and say that if you are reading this, you know the deal. The Celtics choked away two LARGE leads in Games 1 and 2 of the Eastern Conference Finals and now have their backs firmly against the wall. That's not really the whole story here, though. What matters to me is HOW the Celtics found themselves in this predicament. That is the most maddening aspect.

This play, and a highlight reel of 20 turnovers, is all Brad Stevens needs to show the Celtics.

Miami has earned these wins. Boston has not. C's can still win this series if they play with effort and value every offensive possession. pic.twitter.com/kXqWpOcy5Q

Falling down into an 0-2 hole in a playoff series is actually pretty common. It's frustrating and demoralizing, but it's something that happens with regularity. What is unique in this Celtics situation is how impossibly frustrating they have been. I've actually found myself not just yelling at the tv, but flailing my arms and having mini-meltdowns as I plead and urge them to please, PLEASE figure it out. It's peak sports fandom in that I'm letting a game get to me to that point that it's effecting my day to day and the losses are hanging with me. I hate it, but it's something I've felt before.

ESPN Sources: Brad Stevens had a late night Thursday meeting with Celtics leaders – Kemba Walker, Jayson Tatum, Jaylen Brown and Marcus Smart – to work through emotions of post-Game 2 locker room. A lot of yelling in locker room, but nothing escalated to a physical confrontation.

Last year, we got the no heart and no fight Celtics. It was wildly frustrating but it seemed like we could wash it away and pin it on Kyrie Irving. His non-leadership fractured the locker room and jettisoning him would be key to getting back to the mentality that makes this organization go. Sure, we lost talent and we're viewed as underdogs coming into this season, but we'd take that over being the odds-on favorite who craps out when it matters. We needed last year to be the outlier.

For most of this season, and then in the bubble, the Celtics got back to their sweet spot. They rounded into form and looked like a team that knew they had a shot at a title run. The Philly series was a demolition and the Toronto series was a coming-of-age battle with reigning champions. There were way more positives than negatives and even if you thought Miami would have them beat in the ECF, you weren't thinking it would be for lack of effort.

Unfortunately, the Celtics team that we've seen so far against the Heat has not resembled the team we've seen all year. Jaylen Brown is being underutilized and looks like he's growing frustrated. Enes Kanter and Daniel Theis are getting abused in the pick and roll and on the boards. Marcus Smart seems to be making less and less impact. Kemba and Tatum's attitudes seem off. This is all capped by the fact that Brad Stevens seems clueless and unable to make adjustments.

They've always been shaky when playing with a lead. That's kind of just part of the identity of this team. However, in these last two games they've gone totally stagnant and taken their foot off the gas. They slow it down. They run an isolation. They refuse to cut or move without the ball. There's no spacing, movement, hustle or effort plays. On the other side that is ALL we see from the Miami Heat. They play basketball. It's honestly beautiful to watch.

The C's aren't using their advantages enough right now. They aren't pushing the tempo and playing in transition to highlight their athleticism. Tatum hasn't decided that he's the best player on the floor and that he's going to do any and everything to will his team to victory. Brad hasn't figured out how to manage challenges and the clock. It's unraveling. The wheels are falling off and we've got bad body language, finger pointing and locker room blow ups. Someone has to step up. There needs to be a total 180 degree change in attitude before Game 3 or else they might as well pack their bags and succumb to the fact that they let themselves down.

Heading into the next matchup on Saturday, I'm feeling hopeful but also remaining grounded in reality. The Heat are a great TEAM that simply does all of the right things. They want to win more than anyone left in the bubble and they believe they are going to. That mental and physical toughness they have is going to be hard to stop. There's a reason they rolled through the playoffs so far. Taking them down in 4 of the next 6 is going to be a tall task. It can be done though.

My reason for hope is because I believe this Celtics team is tough too. I hate that they needed this wakeup call and to hit this low point to get themselves going but if that's what it's going to take, so be it. While they are still young and this is still a learning experience, the window to win is widest right now. Next year will only be tougher. Time to show what you are made of is more in line with what you were all year long. Tighten things up. No whining or in-fighting. Rebound. Win the 50-50 battle. Take care of the ball. Punch back. Be a likable, hardworking team the way that the Heat are and you were.

I've watched enough of the Celtics this year and been invested enough that I know it's not time to call it quits yet. I hope they don't disappoint me. Even if they can't win the series, show some fight. Make Miami work for it. Don't go out like this. Most importantly, don't put Brad Wanamaker on the floor ever again.