Someone Needs To Get Jayson Tatum A Basketball Hoop Right Now 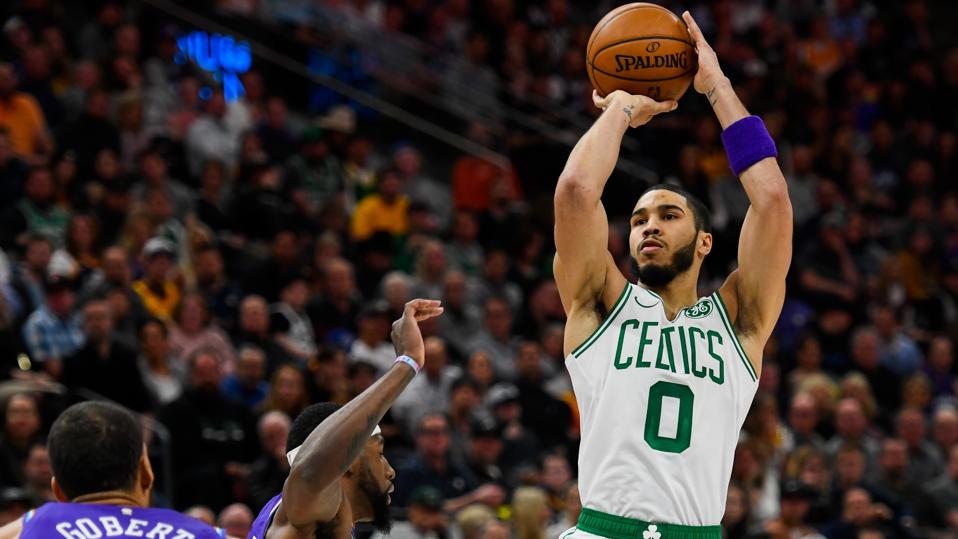 When the NBA season stopped a little over a month ago, there was one Boston Celtics player who had his extremely positive momentum halted as well. Jayson Tatum, the popular young forward, was playing at a level that he hadn't yet reached and coming off of a February "Player of the Month" award. Now, he's sitting at home like the rest of us and surprisingly, isn't working on his game.

To be clear, I'm not saying that as a criticism of Tatum at all. He's been doing what he can to stay in shape at home and I'm sure he'll be the first guy back in the gym once that is allowed again. My issue here is the fact that he doesn't have a basketball hoop to shoot on and thus hasn't touched a basketball since the C's last game against Indiana on March 10th, as he told Rachel Nichols when he appeared on ESPN's "The Jump" a few days ago. Call me crazy, but I'd say shooting and doing drills on a court, with a hoop involved, is the biggest component of a basketball player working on his craft.

Why doesn't Tatum have a hoop at home? I'm not quite sure. I mean the logical explanation is that he is a 19 err.. 22 year-old who hasn't signed his first BIG contract yet and therefore hasn't invested in a mansion with a court yet. He most likely lives in a nice apartment in or around Boston and doesn't have the ability to add a hoop, let alone a court. I'd guess that before this pandemic, he was relying on going to the facility to get shots up, as most players probably do. He could never have seen this coming.

“Make the best use of what is in your power, and take the rest as it happens”. (Epictetus). Keep Working! #powerrunsinthefamily @beatsbydre

With all that said, you'd think the NBA or the Celtics or even Tatum's sponsor, Jordan Brand, would find a way to link him up with a hoop. It only makes sense. What I found out while watching Tatum on "The Jump" is that this problem is not limited to him. It seems to be that many NBA players, including last year's league MVP Giannis Antetokounmpo, don't have hoops at home. That has to change.

I know a lot of people probably roll their eyes when they hear me saying that the player's should be taken care of here. They make enough money even when they haven't signed a giant contract yet, so why should they have anyone give them anything? Well, because the NBA and its teams have a vested interest in their best players playing well when basketball finally returns. Jordan Brand, or Nike, or WHOMEVER, also want their signature athletes to be playing well. Someone needs to step up and get Tatum with a ball in his hand and shooting on a court.

When this pandemic has passed, and Tatum gets paid, he can then do his part. Go buy a big house out in Brookline (I know a few that are for sale) and install an INDOOR court. I say indoor because Tatum's excuse for not having one was that they weather right now isn't too good. Well, it's New England so that's kind of the way it is. Get an indoor court and you can hoop all year.

Previous article: It's Been 100 Years Since The Historic Case Of Sacco & Vanzetti
Next article: Head To Florence Pie Bar & Eat Away Your Stress