Short Of Keeping Tom Brady, Swapping Him For Jimmy Garoppolo Is The Best Case Scenario For The Patriots

Let me be very, very clear. The best case scenario for the Patriots, Tom Brady and the fans of New England is for Brady to re-sign and finish his career where it started. I don't think anyone in their right mind wants to see the GOAT walk out the door to another organization. It would be devastating.

With that said, we need to prepare a bit for what could happen if doomsday comes and Brady heads out in search of greener pastures. Of course, as I said the other day, no one knows a thing about what is going on with Brady and the Pats. The latest, from Tom E. Curran of NBC Sports, is that the San Francisco 49ers, Brady's childhood team, are "closing hard on the outside" to sign the Bay Area native. That's also been coupled with a report from the Boston Globe that Brady and Bill Belichick spoke yesterday and it "didn't go well."

Okay, so let's play with this one. It's juicy and fun, so why not join in on the speculation and pretend there's truth to it. The San Francisco 49ers are a scary opponent in a chase for Brady. Obviously, Brady grew up rooting for them and wouldn't mind going home to play in front of his parents a bit more. The team is also coming off a Super Bowl loss where one could make the argument that the weak link was their quarterback, Jimmy Garoppolo. The puzzle is starting to come together and you're seeing why this is attractive right?

Brady could actually go there and be the "savior" or the guy that gets them over the top to a Super Bowl win or two in his final years. He'd have a plethora of weapons, an offensive-minded, young head coach in Kyle Shanahan and on top of all that, one of the best defenses in the NFL. If there's one spot for Brady that he'd choose over New England, I'm guessing it's San Fran. It makes too much sense. 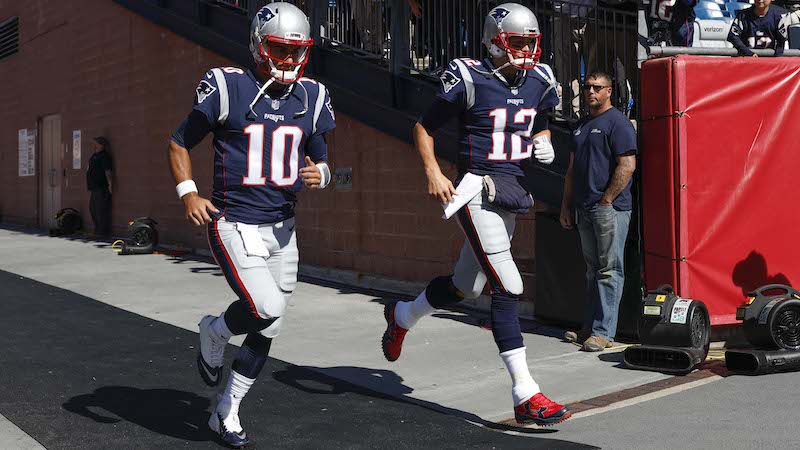 Great, so Tom will be happy and successful, but what about us? Well, I'm willing to bet Bill Belichick and Robert Kraft would be more than happy to bring Jimmy Garoppolo back into the fold. Fans should feel the same way. Jimmy is a winner and although he wasn't exactly lighting the world on fire this year with his arm, he's got the ability to do so. We've seen it in New England and in his first season in the Bay. Put him back in our organization, under our coaching and in our system, and we do not skip a beat.

Many fans in New England have second-guessed the Garoppolo trade since it happened. I'm not one of those people because frankly, the trade had to happen and Brady went on to keep winning and performing for us. However, at this juncture, it may make sense to pull the 28-year-old back. He's gotten more experience and proved himself further and we can now go full steam ahead for the next 10 years or so while surely competing and contending.

What are the alternatives if Brady leaves? Andy Dalton? Yuck. Jameis Winston? I don't see it. Jarret Stidham? Blehhhhh. Jimmy G. gives us an out that we can not just bear, but thrive with. So Tom, if you want to leave, just head back to San Fran and give Garoppolo the boot for the second time in his career. We'll take him and the future will be now. More rings and more parades. Heck, we may even get to take down Brady to lift that Lombardi. What a story it would be.

Previous article: Sample The Best Of Cambridge With 4 Unique Neighborhood Food Tours
Next article: This Spring Ski Celebration Is The Perfect Way To Bid Farewell To Winter