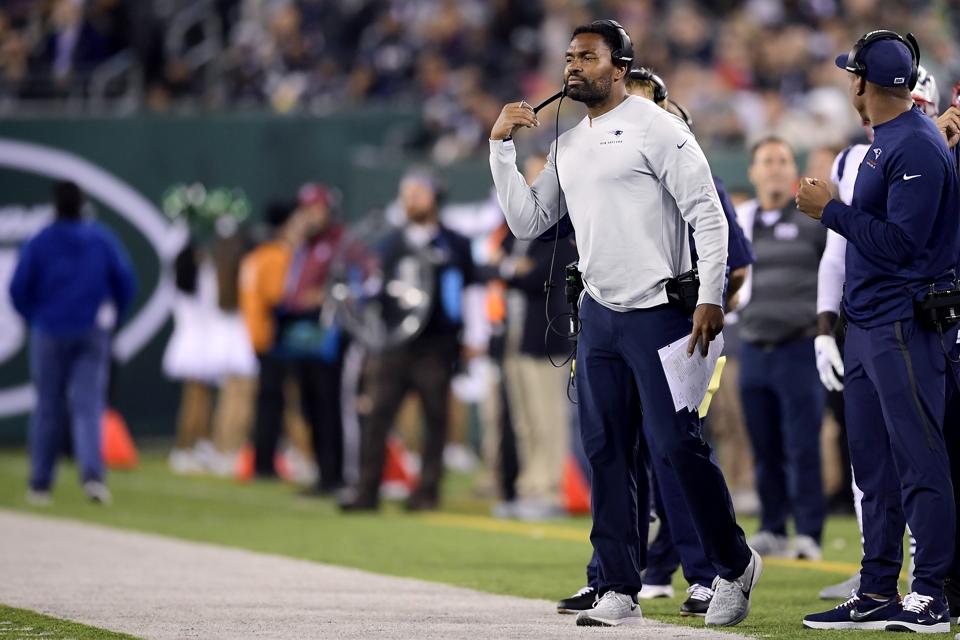 Last night we saw the Patriots trade out of the first round in frustrating, but predictable fashion. A lot of the players that I'd normally preview are now gone off the board so each write up today will obviously only feature players that can be taken tonight once Round 2 kicks off at 7 pm. I'll be locked in again as it should be a busy night for New England (with 5 picks between Rounds 2 and 3) and it's time for Bill Belichick to make his chess moves.

As Patriots fans, we're used to the draft playing out this way. The only difference is, the draft feels like it matters more without Tom Brady and with the current state of the roster. There's no margin for error because we simply will not accept it if the Patriots stink. So let's get to it and highlight the guys that we need to be watching for.

Today, we're going to start with linebackers because free agency decimated our depth chart to the point that Dont'a Hightower is really the only household name left. That doesn't bode well when he's already getting up there in age and we may need to rely on defense quite a lot in the near future. Without further ado, it's time to take a look at the candidates.

Zack Baun - Baun is Mr. Intangible. He gets all the cliche descriptions from scouts like "coach's dream," "lunch pail guy," "high motor," and "high football IQ." The good thing is, he's got talent too. Baun is a skilled pass rusher out of the linebacker position and has the speed to drop into coverage and run with tight ends and running backs in coverage. He's being touted by many as a "Perfect Patriot" and I'd say that seems about right. He was a team captain and a versatile piece to move around on defense that Bill Belichick will love.

What are the downsides? Well, he's got limited athleticism and an injury history that could scare teams off. Still, he fits our scheme and feels like a future Foxborough favorite.

Willie Gay Jr. - If the Patriots want to take a gamble, Willie Gay Jr. is the guy to pick. While he's the most skilled 'backer left on the board, there is a reason he's here. He has had injuries, suspensions, fights with teammates and didn't seem to earn to much trust from his coaches at Mississippi State. Still, he's the classic guy that the Patriots could take and transform into a model citizen and teammate. If they are able to do that, he could be the steal of the draft.

Troy Dye - Troy Dye's tape is something to behold. He's just one of those high effort guys that flies around and is absolutely everywhere in the backfield and sideline to sideline. It's no wonder he had the tackle numbers he had at Oregon. That's the type of player I'm partial to watching, so I'd love to see the Pats bring him in. Add in the fact that he comes from a football family, toughs it out through injuries and seems to be attentive/smart and I'm pretty sold.

Okay, so there has to be some negatives about him right? Otherwise he wouldn't still be available. Well, his size is actually a bit of a question mark. He might be too long and lean. His wingspan is great, but he may need to add some pounds and some power to truly bring his tackling and his block shedding to where they need to be. The good thing is, that's a fixable problem and Dye seems like a prospect worth working with.

Okay, so I only touched on three players at the linebacker position. That is of course, because the crop is thinning and I don't want to highlight guys that I'm not really interested in as a pro prospect. So your Logan Wilson's or Markus Bailey's will not be making the cut moving forward. Let's hope the Pats grab one or two of the three I listed above.

PLAYER THEY SHOULD TAKE: ZACK BAUN

PLAYER THEY WILL TAKE: TROY DYE

Previous article: Patriots Draft Targets: Edge
Next article: This Milk Bar Chef Will Teach You To Bake On Instagram