I Have Been Over-served On Patriots Kool-Aid 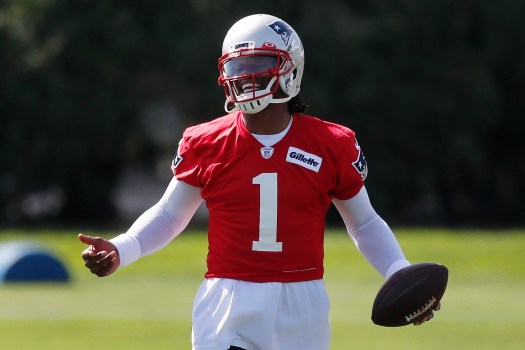 Have you ever had irrational confidence about something? It's kind of a fun thing to have because it always makes you feel good. You can walk out onto a dance floor absolutely CONVINCED that you can move like Michael Jackson. Maybe you step to the tee box with 100% confidence that you'll post a personal best score during a round of 18. Regardless, you have some sort of hop in your step and a cool, calm and collected attitude from the jump. It's great, because if you hold onto that for as long as you can, you'll have an extended period of time that is enjoyable. That is, until reality kicks in and stops gently nudging you to just straight up smack you in the face.

Anyway, that irrational confidence is something that I have with the Patriots. It's been beaten into my brain by Bill Belichick and the whole aura that the franchise carries. For a while, I played the pessimist (or I'd even say realist) among my friends. I'd patronize them for being homers and honks that could only say stupid phrases like "In Belichick We Trust." I'd laugh about them being sheep and try to tell them why cutting player X was a mistake or why drafting player Y further proves that the Patriots don't always do the right thing. They'd simply respond by saying that the results speak for themselves. I'd roll my eyes.

Over the past half-decade or so, I started to question my beliefs. The Patriots kept winning and my friends kept pointing to the trophy case. It all culminated in Super Bowl 51 when I started bad mouthing the Pats for being down 28-3. My group chat banished me and told me to stop being negative. Things would work out, according to them. Still to this day, I say I was being the realist because I WAS. Teams don't come back in that situation. Of course, we all know the Pats did and I could never live it down. I was ashamed that I doubted Brady/Belichick and the Flying Elvis. I'd never do it again.

After all of this, I have it hard-wired into my brain to just trust the Patriots. Of course, things are a bit different this year now that a huge part of the equation, Tom Brady, is gone. However, I still can't kick it. I can't shake the notion that Belichick and the simple fact that they are the Patriots should be enough to continue winning. I know it sounds crazy.

As I write this, we are just days away from kickoff. On Sunday we will see a new era of Patriots football. Cam Newton, with all of his question marks about injury, attitude and skill, will be under center. Our weapons on offense are a joke. Our defense was ravaged by COVID opt-outs. There's no REAL reason to believe this team goes 11-5 or 12-4, yet that's where I am at. I'm drunk on the Patriots Kool-Aid. I am irrationally confident that they will somehow, someway, end up back in the Super Bowl. Belichick has something to prove. People are doubting him and he's going to want to show everyone what he can do without TB12. This season where preparation and discipline will be key, plays right into his hands.

The problem is, whenever I get like this and start to be positive and believe, the Pats disappoint me. I was extremely anti-alarmist in 2017 and 2019 and both times, it hurt me at the last possible moment. This time, it'll cut extra deep because if the Pats don't play well, the future looks bleak. Brady will be gone and we'll see that Belichick made a grave mistake. I hope to not have to face that. I hope to not have to come to grips with reality. Instead, I want to be the guy laughing at the realists and having no real answer to backup why I'm right besides shrugging and saying, "In Bill We Trust."