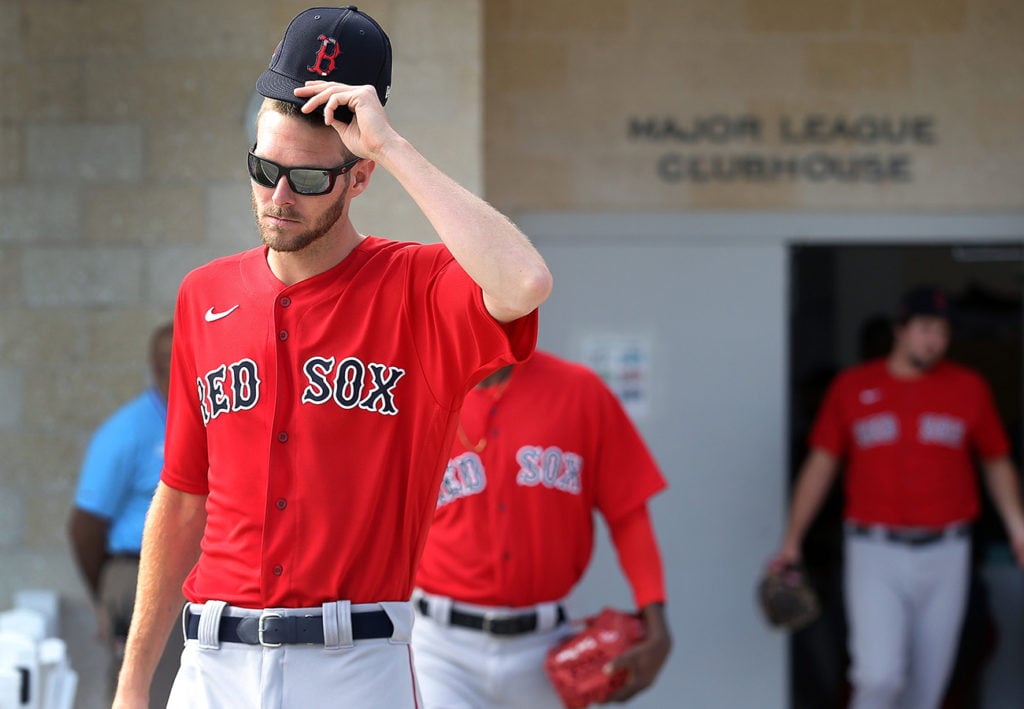 Tall, skinny frame. Violent delivery and arm action. An ace pitcher who relies on velocity and strikeouts. This was bound to happen to Chris Sale. We all knew it when he first came up with the Chicago White Sox and when he was traded over to Boston too. We knew it when the Red Sox signed him to an extension last year. It was always inevitable. Only a minor miracle would have kept Sale from needing Tommy John Surgery in his career.

We are now closer to that becoming a reality than ever before. In fact, just days after I wrote about Sale and his health, we got hit with the grim news. Sale has forearm tightness and needed an MRI. After that, we heard the worst name in baseball. That name is Dr. James Andrews. I don't say he has the worst name in baseball because he's a bad guy or anything, but because of what his name signals. Anytime you hear a pitcher is going to see Dr. Andrews, you know that he's got a serious issue with his arm and he's likely going to need to go under the knife.

Sale had consultations with Dr. Andrews and Dr. Neal ElAttrache, as well as the Red Sox medical staff. As we have touched on before, the big lefty was being brought along slowly so far in camp while trying to bounce back from a myriad of injuries and illnesses. He'd dealt with shoulder and elbow issues in the last two seasons and came to Florida with pneumonia. Despite all of this, he said his arm felt healthy and he remained optimistic about the future.

On Sunday, the 30-year-old had thrown his first live batting practice of Spring Training. One ramped up session with real hitters brought out the worst and now he's in a state of limbo. He wasn't told he needs the dreaded TJ surgery yet, which will put you out of commission for 18 months, but he was cautioned that it could turn out that way in a few weeks if things aren't better. As a Red Sox fan, it's time to accept that this probably going to go poorly just as everything else seems to be.

All we can do now is wait. Sale needs to listen to the doctors, rest and relax a little bit. He's being shut down for a few weeks and that'll further push back his return to the big league club. Should things "work out," I'd say Sale still probably needs Tommy John surgery at some point. He's had too many issues and like I said, this has been building for at least a decade. He's avoided the big issue through an illustrious, Hall of Fame career until now, when the things that have made him succeed have now posed a major problem for the future.

If and when Sale is told he needs to go in for surgery, we're looking at a long road back. Should that be in two weeks, he'll miss all of 2020 and most of 2021. If he goes out there and pitches until his arm falls off, we're only delaying the process. I see some fans and media suggesting the Sox should run him out there this season for as long as they can until that arm does indeed blow out. They say, "well we're paying him so why not let him make the cut himself," meaning rip up the arm by continuing to throw in high stress, game situations. I hate that idea. It's barbaric.

We don't need Chris Sale to prove anything to us. Sure, he's getting paid a lot of money and we'd love to have him on the mound as much as possible. He didn't ask for this to happen and didn't force the Red Sox and John Henry to pay him with money they could have used on Mookie Betts. If you listen to Chris Sale speak ever, and especially yesterday at his press conference about the injury, you know he feels worse about this than anyone. He's beating himself up over not being able to deliver for the fans and the city and earn his contract.

I think most fans can recognize that Chris Sale has earned his contract already. He came to Boston, embraced the city, became appointment television every fifth day and helped us win a World Series. I've never seen an easier athlete to root for in my life and I jokingly said when he signed his contract that he could have his arm fall off or do an unsavory salute towards the Fenway crowd in every start for the rest of his career and I'd STILL be cool with signing him. Obviously, the arm falling off thing hits a little close to home right now. Let's just wait for the official diagnosis in a few weeks...

*Please, please spare me the "The Sox lost the Sale-Moncada trade" argument. That's just such a bad take that I won't even entertain it. Don't try.