Are We Headed For Another Celtics vs Lakers NBA Finals? 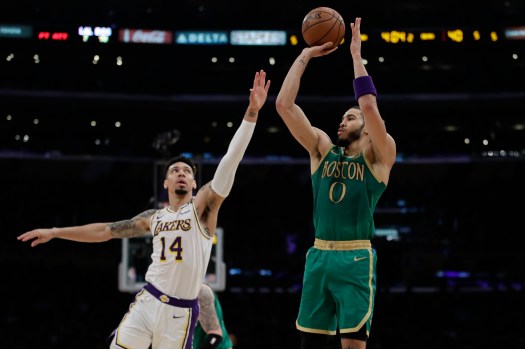 It’s late Sunday afternoon and I’ve just gotten through watching the Celtics fall to the Lakers by a score of 114-112. The game was an instant classic all the way through despite some absolutely atrocious officiating. One could argue that Mark Davis and his crew ruined the flow and quite possibly cost Boston the game, but I won’t be that guy. I’ll choose to focus on the upside here and there’s actually a lot of it.

First off, don’t let this loss distract you from the fact that the Celtics walloped LA in Boston earlier this season. It’s not like they can’t get over the hump against them, because they already have. Today on the west coast, Boston just proved that they really are ready to contend with the big dogs by taking this game all the way down to the wire against a great team with two of the best players in basketball, LeBron James and Anthony Davis. The Lakers have been great all year and have felt like the team to beat out west for a good chunk of the season. Today they were at full strength and fully rested and it took everything they had to beat the Celtics, without Kemba Walker, at home.

Once again, Jayson Tatum went off when it mattered most. Against a big time opponent, on national television, Tatum has really ascended. He dropped 41 points to tie a career high and become the first Celtic to put up 40 against the Lakers in LA since Paul Pierce in 2001. He was the best player on the floor again, and it wasn’t particularly close. If he can keep this up and adjust as teams start to throw different looks at him, Boston is going to be tough to beat.

However, it was LeBron who hit the game-winner on a turnaround fadeaway over Jaylen Brown. In this heavyweight fight, he delivered the knockout blow and we’ll have to wait until June to see if the rivals can meet again.

The thing that gives me faith in both of these teams is that they never seem to completely fall apart. They seem to stay focused and battle night in and night out, regardless of the circumstances. Sure, Milwaukee has been an absolute wagon and the Clippers can’t be counted out, but the Celtics and Lakers rivalry feels like it deserves the big stage again. After 12 years and countless changes, they’ve both made it back to prominence.

Honestly, what a story it would be too. The Lakers with their latest superstar duo and great supporting cast and the Celtics with their well-rounded, unselfish brand of basketball would be A+ in a 7-game series. It could be one of LeBron’s last runs to a title or a changing of the guard to young superstars like Tatum and Brown. Brad Stevens could finally win a championship and take his place among the greats. The Lakers franchise could tie the Celtics for most NBA championships with 17. Los Angeles could honor the memory of Kobe Bryant with what Kobe loved most, winning it all. I could go on and on about possible story lines for what would be an amazing matchup for basketball. The NBA has to be rooting for it. I know I am.